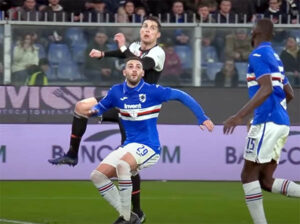 On December 19th, 2019 in a game where Juventus played Sampdoria, Cristiano Ronaldo scored a header goal by producing an astonishing 71cm (2 ft 3″) leap, meaning he reached a height of 8.39ft (2.56m) as he met Alex Sandro’s left-wing cross. As he made the leap he was focused enough to apply a firm header finish past Emil Audero in the Sampdoria goal. What amazed the fans on that night at the Stadio Luigi Ferraris Stadium was the apparent gravity-defying jump as he cleared every defender and hung for an incredible amount of time as he headed the ball into the goal.

Claudio Ranieri the manager of Sampdoria could only gush, “When (Juventus) scored goals like this, we just have to admire them as two masterpieces. Ronaldo scored in NBA style — he was up there for an hour and a half,” said Ranieri in his interview with Sky Sports Italia.”

“His feet were higher than the crossbar … it’s only a slight exaggeration. Ridiculous leap,” tweeted former England striker and pundit Gary Lineker.

So what was the secret behind this amazing goal?

The technique Ronaldo uses to generate power doesn’t just come from the neck muscles. It comes from all over the body starting from his legs and glutes. So when he’s jumping for the ball the momentum comes from the perfectly timed run-up and by engaging both his back and hips as he glides forward. The next thing CR7 does is to stay laser-focused on the connection with the ball. Watch in the video how his eyes never deviate from the flight of the ball. Contact with the ball is made from the upper portion of his forehead. By using this part of the head, the center part, and the thickest part of the skull, the ball is more likely to go in the direction he wants it to go. It’s also worth noting he keeps his eyes open for as long as possible as he heads the ball.  When you are performing a header it’s extremely important that you keep your eyes on the ball. Most players close their eyes and hope the ball hits them rather than focusing on exactly where they want to meet the ball with their head. As you can see even with CR7 it’s near impossible to keep your eyes open at the point of contact but the focus he maintained on the flight of the ball until it meets his head coupled with engaging his whole body is what generated the power.  Cristiano guides the ball with a follow-through push and sends the ball back in the direction from where it came.  All in all a classic headed goal. 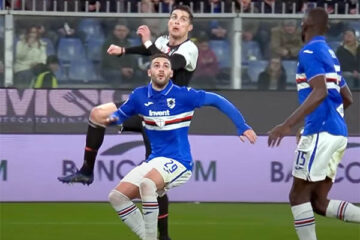